Sheltered is a 4-part documentary series produced for the Aboriginal Peoples Television Network that follows Derek Marsden, an Ojibway carpenter, as he travels the world to learn the ancient home building techniques of the world’s Indigenous and traditional cultures. His journey will take him to locations in Africa, Central and South America where he will live and work with people who are managing to maintain their customs and lifestyle. 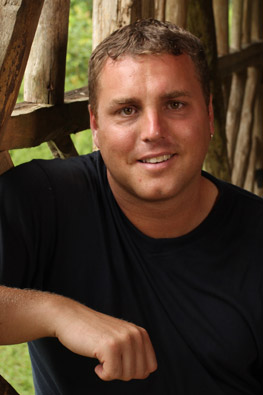 We meet Derek Marsden, an Ojibway carpenter who packs up to leave his home reserve to explore other indigenous cultures and learn traditional house building techniques. His first stop is Lake Titicaca, Peru. These islands are inhabited by the very colourful Uros people. Derek is welcomed on the island by his host Hugo and his newly expanded family. Everything around him is made of reeds, including the island itself! Hugo teaches Derek how to build a traditional home from harvesting the reeds by boat to sewing reed mats for the roofing.

Derek travels to Costa Rica. It is in this dense rain forest setting where the Bri Bri people build their homes using bamboo and vine. Derek is invited to live with Victor and his Bri Bri family in their home. He meets Armando, a village elder who teaches him how to build a traditional shelter just like the one he’s been living in. Armando is tireless and Derek has a hard time keeping up with him, whether carrying heavy loads of palm leaves on his back or learning to handle a machete. The language barrier doesn’t stop Derek and Armando from developing a lasting friendship.

Episode 3 “Bénin: Hot Enough For Ya?“

Derek travels to the tiny, but bustling West-African country of Bénin. The Bètchabè people here live in three storey castle-like houses called Tata-Sombas. The heat and humidity are oppressive and Derek feels like he’s sleeping in an oven. The Tata-Sombas are made from clay and tree branches. He works on these homes in various stages of construction, alongside the villagers and experiences their joie de vivre first hand.

Derek unpacks his bags in northern Namibia where the Himba people’s lives depend upon their cattle and goats. Their wealth is measured in cattle, and their wives are bought with them. Derek quickly learns what else the cattle are good for, as he is sent out with the women to very reluctantly collect fresh dung to help build a new shelter. Mixing dung with sand and saplings, he helps his host family fashion the simple cone-shaped dwelling that will house their ever-expanding family.